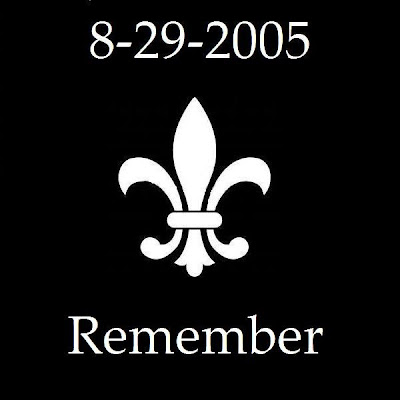 "The total number of fatalities known, as of this writing, to be either directly or indirectly related to Katrina is 1833, based on reports to date from state and local officials in five states: 1577 fatalities in Louisiana, 238 in Mississippi, 14 in Florida, 2 in Georgia, and 2 in Alabama."

It was just another white pick-up truck, clattering as we all do down the streets of New Orleans. Sticking out the bed was an assortment of tongue-and-groove lumber, in pretty good shape by all appearances, although certainly not new. No, not store bought. Old.

We cherish the old things in New Orleans. I am sure that just about everywhere else in America, the weekend handymen make a beeline to the local big-box "home improvement" store to fill their cars, their trunks and truck beds with the finest, fresh-cut lumber for their latest projects.

Not that there's anything wrong with that.

America was just recently enthralled with the "Cash for Clunkers" program, an economic stimulus scheme with the added benefit of disposing of a lot of old cars from our highways and driveways. Because old is bad. Old is inefficient. Old is unreliable.

But I venture nobody ever pined for a poster of a 2009 Ford Taurus to decorate their dorm room. No band ever considered posing with a 2008 Chevrolet Impala for the cover of their new CD. New, it turns out, has its limitations.

And in a city on the verge of 300 years old, I think we understand that. Where others see blight to be removed, we see our squandered heritage and fight to preserve it. Where others revel in the "hip" and "now," we're happy to say "Where y'at?" for a few more decades. Where others dine on Nouveau Cuisine, we're happy to eat stuffed mirlitons like grandma used to make.

So I smiled when I saw that truck filled with reused lumber. I don't know what project they were working on, but I would not be surprised if it was going to be a dining room floor or a paneled wall for a house that was already 100 years old.

It's begun. They told us "hurricane season" started June 1, but we all know the real time of worry is August and September.

So here we are looking at maps again. Waiting and worrying.

My Darling Wife had to go to City Hall the other day to conduct some routine business.

Which is almost laughable to anyone who has been to City Hall and knows the truth: the only thing “routine” about business there is that it’s frustrating and painful.

It turns out that when we moved to our new house in 2008 the assessor lost our homestead exemption application. The result being that we’ve overpaid property taxes for two years now and we’re due a refund.

Fearlessly, my Darling Wife first visited the assessor’s office on the third floor and was able to convince them of the error. It took a few months but a corrected assessment was provided. For a refund, she was advised to call upon the finance department on the first floor.

A few clicks of a computer and the finance department confirmed it: yes, the city had collected more than the adjusted tax bill and a refund was in order. All we had to do was produce the cancelled check.

The cancelled check? My Darling Wife asked, why do you need that? Didn’t you just confirm that the taxes were overpaid?

Yes, the finance department said, we confirm the taxes were overpaid. We are prepared to order a refund. But we need to know who gets the refund.

My Darling Wife was confused. As the property owner and the person who overpaid the taxes, wouldn’t you just give the refund to me?

We will issue a refund to the person who overpaid the taxes, the finance department said.

And that’s me, she replied.

How do we know that? the finance department asked. We need proof.

My Darling Wife wondered aloud, who else but us would be paying our property taxes?

We need the cancelled check, or a notarized affidavit.

It was her third trip to City Hall to conduct this same routine business.

And as I often complain, if educated people with good communication skills have this much trouble interfacing with government, what must it be like for less educated, less articulate citizens?

In fact, while in line to complete our paperwork, my Darling Wife met a man who had come to City Hall to pay delinquent taxes. He explained that if he did not pay his taxes soon, the city would quickly be moving to take his house. His tax bill was about $300, and he had brought cash to pay it and end the threat of foreclosure.

But once he stepped up to the window, the finance department informed him that a late penalty had been added to this bill. Apparently surprised at the news, the man pulled out every dollar he had on his person.

Sorry, said the finance department. Next!

Flustered, the man turned to leave.

My Darling Wife said the man looked like he had struggled mightily to scrape together the tax money. She fully understood his frustration at having to go home with unfinished business and the prospect of coming back to do it all again another day.

So she gave him $4, and he paid his property taxes in full.

We live in a city of haves and have-nots.

And I remain forever grateful for what I have: a wife who willingly takes on City Hall in all its soulless bureaucracy, and who remembers that it is the smallest acts of kindness that preserve our humanity and make urban living possible.
Posted by Tim at 12:44 AM 6 comments: