This story filled me with admiration, pride and sorrow all at the same time.

Lest We Forget, published online by GovExec.com, reminds us that there are at least 180,000 soldiers, sailors, airmen and Marines away from home this holiday season--many in harm's way. Read it and remember.

I do not agree with the political policies behind our incursions in Iraq and Afghanistan, and I strongly question the Constitutionality of the use our military there. But I salute those who live up to the Army Value of Selfless Service.

This time of year--the darkest and coldest days in the Northern hemisphere--is the time commonly chosen to remember what's good in this world and to dream about how it can be made better in the coming year. Let's remember the outstanding individuals of our volunteer armed forces.

The other night I showed my Precious Daughter what grown-ups do for Christmas. Well, grown-ups who are also NOLA Bloggers, that is. If you didn't know, they engage in a Christmas video war dubbed the "Hostilidays."

The idea is to post the most silly, annoying and offensive videos. So far, a whole slew of bloggers have joined in battle including Oyster, Maitri, Varg, Greg, Leigh, Loki, Adrastos, Mark, and Howie.

I had not participated in this ugly annual exchange--until now.

It just so happens that my Precious Daughter has started to learn Chinese in school. She came home today eager to tell me about how they were learning "Jingle Bells" in Chinese, and that they had seen a truly awful video of it as part of the lesson. She suggested it would be appropriate for Hostilidays and I agreed.

Such a simple thing. It's almost inconceivable that the City of New Orleans has no written criteria for assigning take-home vehicles. And no established method to monitor or restrict their personal use. And no requirement that employees with take home vehicles document any public purpose for all the expenses the city pays to provide insurance, maintenance and unlimited fuel.

I said, "almost inconceivable," because in fact, we are talking about New Orleans here.

And who ever thought for one second that our city was well managed?

We didn't need proof, but now we have it. The report by the city's own Office of the Inspector General came out yesterday, and it's a scorcher with silk gloves. Again and again, the report makes straightforward, common-sense observations about what should be done and what is not done. In a community that is struggling every day and with every dollar to get back on its feet, the results are chilling.

Waste? That's almost a given. But what would you expect when you give employees a free car with unlimited fuel and nobody watching what they do or where they go with it? How can there not be waste when there's no written criteria or centralized oversight for who gets a city vehicle with take home privileges?

Fraud? There's no way to gauge it since there's no accountability, but I think it's safe to assume the worst. The report notes the curious instances where an employee with a city-owned Ford F-150 equipped with an 18-gallon gas tank pulled into a gas station one day and put 91.2 gallons on the city's credit card. And the employee with the Ford Taurus, a car that holds 18 gallons max, who charged 39.9 gallons on a single visit to the pump.

Abuse? How about take home cars assigned to two employees who live in Baton Rouge. And the tortured story of the city employee who had four city vehicles parked in front of his house for at least a month: the first was old and unreliable and only for local use, the second was borrowed from an employee on sick leave, the third was a brand new truck that was to be assigned to others but was being used by the employee until the full shipment of new vehicles arrived, and the fourth was yet another new vehicle assigned to the employee to replace the old and unreliable first vehicle. Huh?

And here's the kicker: this is just an interim report. There's more to come once the OIG gets to investigate the use of cars by the NOPD, Aviation Board, Civil Sheriff, Criminal Sheriff and Sewerage and Water Board. If those guys are smart, they'll start to get their house in order BEFORE the OIG shows up, especially since now they know what they'll be looking for.

Kudos to Robert Cerasoli, Inspector General for an outstanding job. Give him credit for a report that avoids finger-wagging and haughty accusations of mismanagement. Instead, the overall tone is one of helpful advice. Nowhere is it suggested that anyone knowingly misused or abused privileges, and this makes it much easier for the responsible city officials to take the constructive criticism of the report and make changes.

If there's one person who deserves as much help as we can give him, it's Robert Cerasoli. Let's hope that he--of all the city's employees--truly has unlimited fuel to keep doing what he's doing.


Thanks, Maitri, for hosting the Interim Report on the Management of the Administrative Vehicle Fleet.
Posted by Tim at 7:32 PM 1 comment:

It doesn't happen too often, so when it does it's quite an event. I had already arrived at work today when we started to hear reports of snow.

Baton Rouge, we heard, then Covington.

Suddenly one of my colleagues was putting on her coat. "What's going on?" I asked.

"I'm going outside to see the snow," she said.

I thought she might be kidding or was duped by a rumor until I looked out the window and saw it: large flat flakes floating and blowing by the window. Snow! 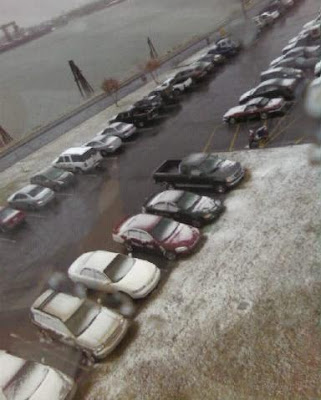 I took some pictures with my cell phone so the quality is limited. Still, you can see the white covering the cars in the parking lot, and the blanket of white all the way up the Mississippi River levee.

The rooftops of the houses nearby were blanketed white. Somehow, it made the aged, beaten buildings all look pretty. 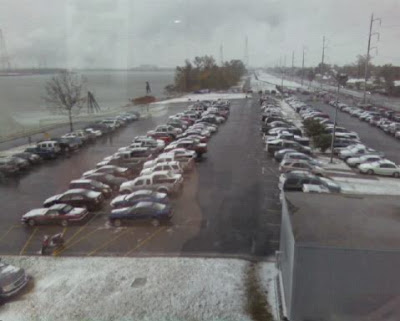 Most of my coworkers made it to the office okay, but a one or two who lived on the North shore phoned in saying they couldn't make the trip. Since the office was open, they will have to use their own leave time for missing work today. I don't think anyone was complaining about that, though. It was probably a good day to take off.

By lunchtime most of the snow had already melted away. New Orleans returned to being just another cold, wet city.