We went over to the north shore of Lake Pontchartrain to visit my wife's father today. He lives in Mandeville, which is a bedroom community spread out under the tall pine trees. It's easy to get to if you don't mind the 26-mile drive and the $3 toll.

Folks who live on that side of the lake do not have hurricane protection levees. Most don't need them because the ground is generally higher. Only the people who live within a mile or two of the lake are low enough to be in danger of flooding when hurricanes come this way.

What they do worry about is trees. When Hurricane Katrina roared through here a few months ago, she snapped pine trees by the thousands. A lot of people move to Mandeville for the beautiful and abundant trees. And ironically, the trees are a constant worry once they're there.

One of these large trees fell right on my father-in-law's house during the hurricane. It has since been hauled away and he's had carpenters build an almost entirely new roof. But there are still plenty of fallen and cut-up trees all around.

I took this picture of a pine tree in his backyard that cracked right near the base. I would guess this tree was about 6 to 8 feet around where it broke, so you get the idea how much damage this hurricane did. 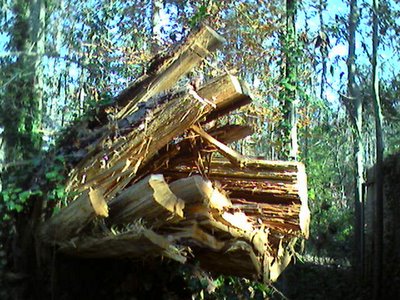 And yet, this hurricane really wasn't that bad. It was not "The Big One" we've often heard about. Katrina actually weakened right before coming ashore to a Category 3 storm, so sustained winds were just above 110 miles per hour. And the worst winds were to the east of the eye, so New Orleans and Mandeville did not get beaten with the strongest winds.

But look what happened.

Immediately after pictures of flooding in New Orleans appeared on television, I heard people saying that it's crazy to live below sea level. We should know better.

What then, would they say about the residents of Mandeville? They live surrounded by towering pine trees. Are they crazy to live in forest-like subdivisions? Should they take defensive action immediately and cut back all trees that might fall on their houses in the next hurricane?

I say no. This is simply another example of how we live in nature. This is not a battle between humans and nature; this is the natural struggle of humans in nature. We humans are part of the natural world, and we should remain connected to nature and the environment. This is no contest with winners and losers, but more of a partnership with mutually beneficial balances of good and ill.

Unfortunately, hurricanes are part of the natural world, too, so we have to learn to live with them as well. Cut down all the trees? Abandon New Orleans and low-lying areas? That's what I would call crazy.

My father-in-law has almost finished making repairs to his home in the wooded town of Mandeville. And all around, nature is also repairing and rebuilding where trees broke and fell.
Posted by Tim at 10:53 PM

Here in Atlanta we have trees that smash into houses and the occasional car when a bad storm passes through. Now and again, it kills someone. We could cut them all down, or not have built this damn city on this plateau just south of the mountains, where we get so many thunderstorms. And, now that I think of it, isn't there a fault line that runs through norhthern Alabama? My most recent posting on my blog is about this issue. It makes me very, very angry when I hear some fool suggest that we should abandon NOLA.

The fact is American society has wandered well away from living in the natural world. There have always been and will always be hurricanes, earthquakes, tornadoes, floods, etc. Other,perhaps more primitive, cultures still recognize we have no control over nature and must learn to live with whatever she doles out. (See story of Moken people surviving the Tsunami on CBSnews.com - 60 Minutes) We cannot & should not run & hide from nature. Long live New Orleans!

Some of the worst damage here in southeast Texas from Hurricane Rita was 100 miles inland in the Sam Rayburn lake area, also from trees and wind.

Hi, I came over from Laurie's blog.

I just moved to Baton Rouge from Beaumont, where we were hit pretty hard by Rita. Most of our damage was from downed trees due to high winds. My parents lost some of their roof and all of their 100 year old cedars.

What's funny about those people saying it's crazy to live below sea level is that a lot of them live along fault lines and in areas hit by blizzards. Who's crazy? At least you can see a hurricane coming.